The first blog on this site was originally scripted in April 2017 but the dates for some blogs were changed to show the history of my Lymphoma experience.

Since launching we have been viewed by 60 Countries worldwide and 6,407 official views. The most popular day however was the 24th of Oct 2017 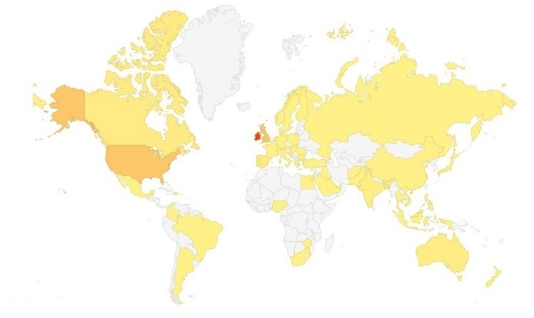 May 2017 still remains the most viewed month followed by March 2018. The support has been great thank you

Since the blog was launched there has only been one day that no one visited the site and that was Saturday the 7th of April 2018, this was the day that I rushed to Dublin as my Mum was given hours to live but she managed to fight off death for 48 hours, glad I got that gene. Now I find this so strange that in the full year we had visitors to the blog every single day except the 7th. Obviously at the time I did not notice this as my mind was elsewhere but it has raised the hairs on my neck just thinking about the how and why this happened.

As previously promised I will not change any of the details on the blogs as they were scripted as it happened and tells the real story, in some or most cases during therapy I have not gone into great detail but this is my story as I see it and the end result still remains as remission.

My Relapse Story: Remission – In or Out

What happened to Speed Express

ABVD Chemotherapy 2014 Part 2 May to August

Hodgkin’s Lymphoma Awareness This is where the Full Story will Start…….. 10th Feb 2014