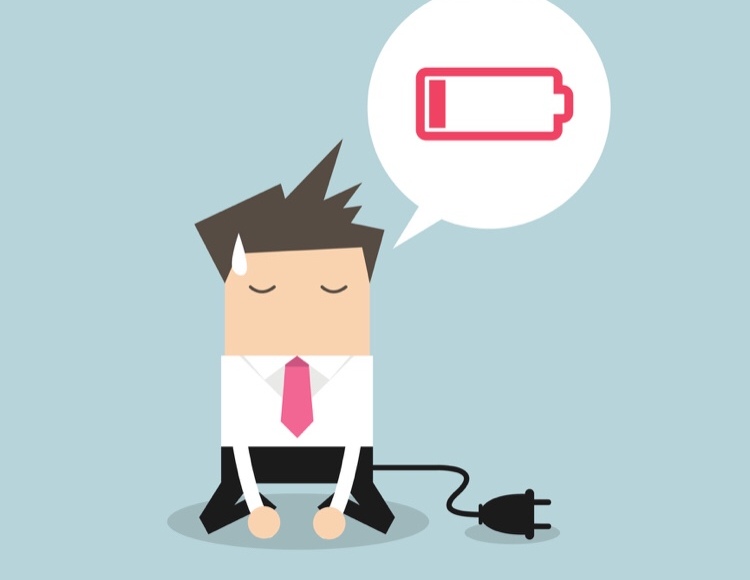 Not even sure where to start here.. so I decided to update what this blog is based on – Lymphoma & Awareness.

In simple terms this time 2 years ago I was dying and the medical team were talking not in days but hours that I would remain conscious before going into unconsciousness prior to death. But they pulled me back and I succeeded in getting a cancer clear PET scan 100 days later. But what a week that was in July 2017. I had completed ICE chemotherapy in May, succeeded in producing a clean stem cell harvest in early June and then entered St James advance cancer care facility in July to firstly be given the most aggressive level of chemotherapy known to modern medicine called BEAM, these drugs kill every regenerating cell in the body, followed on 13th July 2017 by the Stem Cell Transplant. Once I got the Transplant I was placed into palliative care The week that followed this was extremely difficult. Within 7 days I was at the point of been told I had six hours to make whatever calls I needed to make. I was dying, but looking back I was dying without many regrets and I was ready to say goodbye. I had spent 9 days just about able to get out of bed and then by some small miracle everything changed. 5 days later I was discharged & let home. Be under no illusion I remember ever waking hour of those 21 days, the pain, the fear, the magnificent medical team, the support, the struggle between life & death and finally the self motivation & drive. How and why I not only survived but recovered so fast has never been explained – it simply wasn’t my time and God’s plan for me has yet to be seen. I lost my faith in religious organizations a long time ago but I do believe in God, and God is great.

Since commencing the Stem Cell Transplant therapy I had been advised to start using Fitbit to measure activity. I found this great. But that week in July 2017 should how bad things were 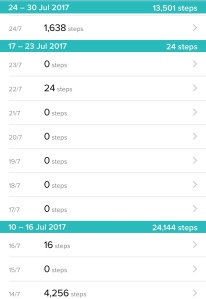 The 24 steps would have been too the toilets and back and that’s if I had remembered to ware the unit. 12 months later the same week looked like this 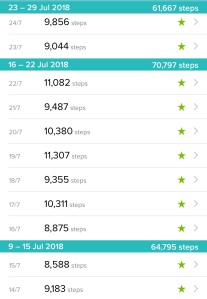 And this year even with work 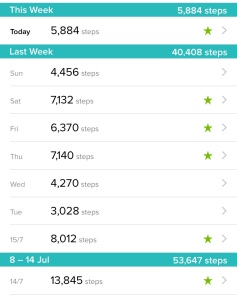 Basically I was pulled back from death. 8 months later I was formally placed for the second time in remission and 8 months after that I went back to full time employment. This is not a work of fiction it’s documented medical fact. We can kick the shit out of Cancer even terminal cancer, we can say no to cancer and most definitely together we are stronger.

I get a lot of people asking me how I managed my way through all this. Within the blogs I go quiet deep in mental awareness. The mental challenges vastly outweigh the physical ones.

I’m not married so 5 is out but the other 4 are quiet repetitive over the past two years.

Death: My mentor, life long friend and inspiration passed away on the 9th of April 2018 – my Mum.

Critical illness: I have been declared terminal twice in the past two years, relapsed to Stage 4 Non Hodgkins Lymphoma, undergone extreme levels of chemotherapy and procedures

Moving/Selling/ Buying a home: After my Mum passed I had to sell her home, not only sell it but empty it. It took 4 months to complete including probate which my lawyer reckons was the fastest he ever handled. The day after I announced my return to work in Jan 2019 my landlord gave me 5 months notice to get out. We found a house we loved in April and finalized purchase by the first week in June – we moved in the day of completing.

Unemployment and employment. The closure of my business in 2017 after been declared terminal followed by the underhanded backstabbing hurt but I was centered and focused on beating cancer. After been declared cancer clear in March 2018 I had to take time out to sell my Mums home, by September 2018 I was ready to return. I succeeded in securing a Senior Management position by Jan 2019 and have been working ever since

I have not only experienced the top 4 stress once in 2 years but in some cases multiple times.

Short term memory loss & talking to yourself During the chemotherapy & Radiotherapy I did have some level of recent memory loss, not sure if the medical team consider this to be temporary dementia or not. I had my IQ measured prior to commencing each therapy and it ranged from 136 to 142. However after ABVD (the first Chemotherapy in 2014) my IQ was 110. Prior to ICE in 2017 i felt it was back up but from May 17 to Sept 17 I have no doubt it was low. Today I would be confident to believe its back fully. However throughout chemotherapy and for months to follow the forgetfulness was there. At certain points I even made list of drugs I needed to take and when. This was also the reason to take so many courses over the recovery process.

Talking to yourself- we all do this constantly every day, it’s human nature and part of the decision making process we all have. However when you start talking out loud to yourself it becomes an issue. I hid this quiet well and the reoccurrence are getting less and less.

On the physical side: well I’m getting older so I can’t expect to do like I used to 5 years ago. After the beating my body has taken with Radiotherapy and chemotherapy I’m lucky to be so active yet my biggest single obstacle is fatigue. I am still been attacked daily with fatigue. My medical team wanted me to reduce my working week from 5 days to 3, I reduced it to 4 last month without any success. I have taken boosters, multi vitamins, exercise and still can’t overcome fatigue. With 5 physiological diplomas achieved I have the skill set to look deep within my mind and yet fatigue attacks. I know nearly every cancer or stroke victim has the same issue. I have recently discussed the fatigue issue with an equal minded person who operates their own transport business in the UK, this gentleman had a serious stroke last Oct and he has agreed that fatigue is the biggest obstacle in his recovery. Doctors in the US researched cancer fatigue and felt that mid level exercise can reduce and beat fatigue- seriously lads unless you have experienced full cancer fatigue please don’t go there. Fatigue drains you completely, you don’t even feel like getting up when it attacks let alone pumping sweat. Fatigue is one that is really challenging me and I consider it to be an ongoing issue that I will beat in time.

Other issues on the physical side include recent eye strokes, as per my last blog “Eyes”, I underwent procedures to help this and I am awaiting results but in the last week I have had at least two more minor strokes. Last Thursday I had a CT NTAP and the results showed no reoccurrence of Lymphoma but it did show other issues which my oncologist will address in 6 August.

But I’m alive, working and adding my share to society. So if fatigue is my only serious issue then I have no complaints

My next team meeting with the Oncologist is the 6th of August with blood test the previous week. I think the eye consultant will be there. So two weeks to go.

However July for me can be a difficult month. My Dad would have been 90 years old on the 9th of July, he passed away in November 1994 from colon cancer. Mum & Dads wedding anniversary was the 23rd July, this year they would have been 62 years married. And how I miss them is beyond words. 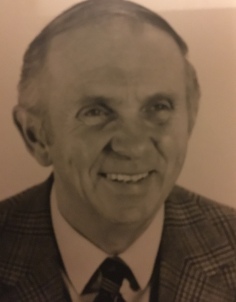 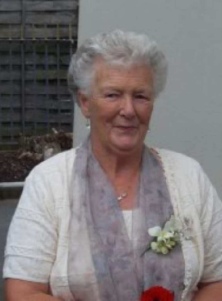 But at the end of the day July is a month when I beat a terminal illness, walked away from a Stem Cell Transplant and survived.

The blog site has most definitely surpassed all expectations 15,000 viewers from 76 countries. Awareness is vital and understanding the physical and mental issue is important. We need to take the fear factor out of Cancer.

Apart from having a nest of very friendly Robins in the new garden we have an abundance of other birds, rabbits, Foxes and many more. Today we were up in a garden centre and I went to show the horticulturist a photo of the garden only to find this image which I saved last year appear when I unlocked the phone 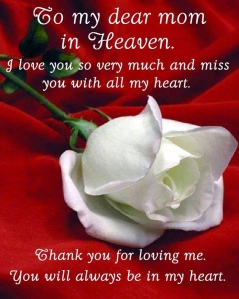 The horticulturist was so shocked she asked what my Mums favorite garden plant was and I said Flower of the Forest to which she handed us one free of change. There really are some wonderful people left on the planet 🌏

And with that I will sign off for now. Live for everyday enjoy life as you never know what tomorrow brings. God moves in mysterious ways