A week before my operation in April one of our friends, an ex work manager of Ian’s paid us a visit.

We were sitting in the kitchen having a chat when he asked Ian about the range.. the range was a Stanley Solid fuel cooker set in the corner of the kitchen, Ian’s answer instantly worried me. “Ken that range is buggered, since we moved in over 18 months ago we have used it 3 times, two Christmas Days and once during an ESB power cut. Basically the ovens are fucked and it takes about an hour to even start heating. We have to open windows to let the smoke out and it’s basically a dust trap, it’s one of the last items I want to change in this house” I started to worry….. Ken’s answer was along on lines of “ You couldn’t do that on your own Ian that is seriously a big job”

I looked at Ian and my first thought was

Ian was busy doing multiple jobs in the house and gardens. On the 30th of April I had a Fusion Operation to my right foot. A rather painful experience. Ian dropped me off on the Friday and collected me on Saturday. 1st May. He surprised me when he took this photo…

The timeline after that gets strange. It was a bank holiday weekend and quiet nice. Apart from making breakfast, lunch, dinners and teas Ian was working in the garden. The garden is actually .6 of an acre. It’s massive and split into 3 sections. The front garden is completely paved, the rear is a big green area and the side is a small green area.

On Tuesday 4th of May Ian got a call. He was getting his first vaccine jab on Friday the 7th. Two days beforehand Ian said that he wanted a closer look at the range and was planning to take “the top off” to look, which he did on the Thursday, The range “was” an old Stanley Super 90, it was in the house when he bought it. The range was badly leaning to one side and neither of the ovens were useable.

So on Thursday afternoon Ian removed the top of it. This range is about 800 Kgs of steel. It took hours to do as he didn’t want to damage the vents etc. There was massive amounts of dust. But by 6pm he told me that the range could not be repaired.

Next morning 7th of May Ian left the house early to meet his medical team for his first Covid Jab. He got home at about 1 and took the dog for a walk. He made lunch and told me he wanted to remove some of the range and said he was closing the door between the kitchen and TV room to stop dust.

Try picturing this. A closed door and the first thing I hear is steel being hit by a hammer, some really bad language and the back door opening. Then about 20 minutes of an angle grinder followed by more colourful language. And then it went very quiet. Ian came into the TV room with a cuppa tea and said he needed about 30 minutes more. He was black with dust. He went and closed the door. 40 minutes later he came back in..

I went into the kitchen and as normal my mouth dropped. Ian had removed the entire range, gone. He had cleaned the area up fully. The reason why the range was badly damaged was because there was a hole under it, the base was rotten with rust. During removing the range Ian found the back plate which had the year and date of manufacture, we thought it was bought new in 2002 but that was not correct it was actually built in 1994 and never serviced.

But a massive amount  of work removing it, the job was a filthy one as the amount of soot was unreal – about 4 black bags full. Ian blocked off the chimney and said he would tackle that the following week. After all that he put on the dinner for me.

Next morning he was up bright and early. Started his day by mixing 500kgs of cement for a new base where the range had been and dry filled the hole. By midday he was in the garden.

Ian had mentioned that he was thinking of replacing the range with a new dual fuel range. Gas hobs and electric oven. But late Saturday evening when he was finished gardening he said he had changed him mind about the range. Basically he felt that the distance between the top of the range and a suitable extractor would be too small. He felt that a wood/oil burner stove would be much better. However to do this properly he would need to rebuild part of the kitchen fireplace. I really liked this idea and Ian went on the internet to source red bricks. he took part of Sunday off. In reality there was no fireplace then.

On Monday he took delivery of 2000kgs of small stones for a new gateway he had built. He went at preparing the area for a layer of topsoil that arrived on Tuesday actually 3,500kgs. It was pouring rain but he still shifted it from our driveway to bottom gate, roughly 150ft. He used a wheelbarrow. He also shifted some of the topsoil up two steps onto our side garden, some was about 2000kgs. By Wednesday he took another delivery of small stones 2,500kgs. Here are the results

And a new side entrance

And the side garden

By Monday 17th of May he was finishing up the garden area when the red bricks arrived. 200 of them, He asked the driver to let him offload by hand and basically he stripped a pallet in 20 minutes while the driver had a cuppa. Lovely guy actually who really wanted to help. After the guy left another truck came with cement, sand, bags of compost and fire boards. On Tuesday Ian fireproofed the boiler house. Followed by Fireproofing the intended new fireplace. Wednesday was spent cleaning the red bricks and moving 1/2 of them into the house. Thursday he hit the gardens again.

On Friday I had my vaccine- J&J – I can’t drive till late June so Ian went shopping first, back to the house to collect me then Mallow for my vaccination. We got home at 2:30pm and he took the dog for a walk. But he decided to leave working as the weather was really bad. My arm was painful from the vaccine and I had a bad headache the vaccine triggered my arthritis & fatigue hit. I was panned out for 3 days

Saturday the 22nd and off he goes. He sowed grass onto the side area, topped it with 11 bags of compost. By 1pm he had finished. But he commenced working of the new fireplace

And the last week in May he went at placing up a privacy screen. This screen was hand built by Ian. In total he used 25 beams he cut them down to size and used all the cuts to produce 50 of them

Into June and on the 3rd of June Ian got his second vaccine 💉 – the appointment was for 4:15 so that morning he tiled the newly built fireplace in the kitchen. When he got home he took the dog for a walk and made dinner. He then started to level the top of the fireplace with concrete. – by 8pm he had a mild headache & took a couple of paracetamols (WIMP) … I’m sure the batch they gave him was pure water, but considering the levels of Chemotherapy he has had since 2014 & the fact that his oncologist nicknamed him a “Chemo Monster” proberbly explains why the only side effect was a mild headache.

Friday 4th. Ian was up bright & early and off to B&Q which is about 35 miles away, then back to Tesco & home. One of the items he needed was a special fireproof red brick paint. Before work he walked the dog – He got home changed into working clothes and finished prepping the fireplace

One of our neighbours came over to see how I was, lovely lady. She looked at Ian (who had a small sledgehammer in his hand) and I quote “ Ned and myself agreed about a week into the New Year that if Ian’s car was in the driveway and we didn’t see him working we would call emergency services” “does he ever actually stop ????” Ian just laughed and said “watch what I’m doing next” and walked away…. To be fair all the neighbours love him, the house in less than two years has visually massively improved. People actually slow down passing the house to see what Ian has changed, honestly we’re just waiting for one of them to crash.

Ian turns 59 on the 12th of June. He is physically fitter than the day I met him in July 2000. in the past 7 years he has beaten Stage 4 “Terminal” Lymphoma twice. He has had extreme levels of Chemotherapy, excessive radiotherapy and a full autologous stem cell transplant. He lost his Mum to vascular dementia in April 2018, He regained work in 2018, purchased the house in 2019, was diagnosed with Covid 19 April 2020, unfortunately was fully isolated for over a year and lost his job in Oct 2020. He had worked throughout COVID-19 and I saw him struggling to breathe in April 2020 but still opening his laptop from 9am every day till whenever- the company wanted Ian on site in office fully from late September, the medical team would not allow that type of exposure but they did okay splitting the work between offsite & onsite. Ended up with a situation with the employer that could not be resolved so Ian got laid off, which was their loss and the houses gain. Attempts at preventing him from gaining employment should not be attempted. I’ve know him over 20 years and he plays a long game. If he decides to rain hell on anyone he will it’s just a matter of when, and god help anyone getting in his way.

His oncologist has agreed that he can return to a working environment from mid June, knowing Ian as I do he might wait a few weeks, but looking at him I would say Ian is ready. Added to that he will not be happy with this post… grumpy old fucker that he is 🥳.

I’ll finish this with some photos of the renovations 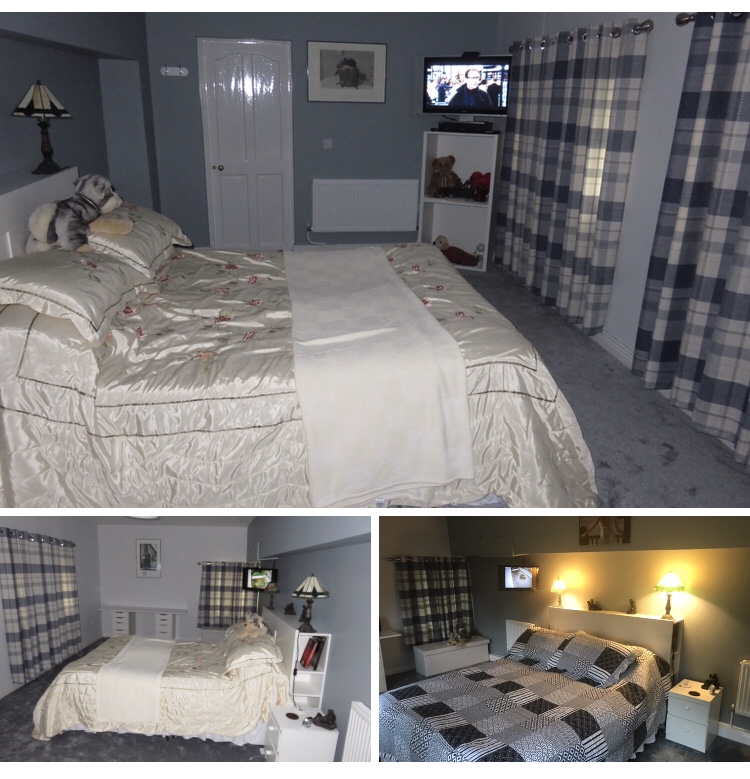 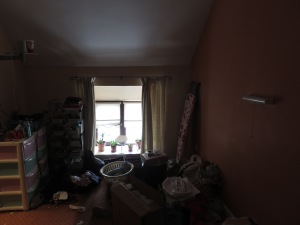 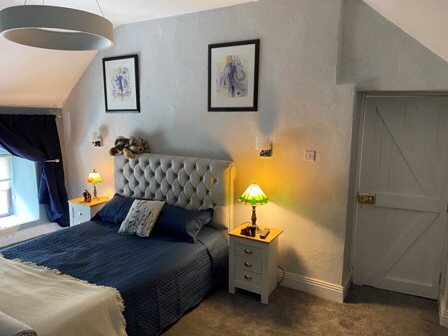 Ian has now completed nearly all the projects on the house, whats left is weather pending. Once he was told about the vaccine he upped his game with a view to getting  everything done so he can focus on gaining employment. But Just before I published this page Ian looked and me and said “Guess what project I’ve been thinking 💭 about” – OMG seriously