Again this is really for current victims and family victims:

Everything stated on the 10th April to prepare for this day. 56 days ago I dragged myself to hell and back, 9 days of chemotherapy and in that time close to 110 hours of Chemo drugs. That is 3 times what I got in ABVD in 2014. Intense, aggressive and not easy.

This part is controlled by St James Hospital Dublin. Our appointment was for 8am we arrived at 7:40am to find the place packed. There was a bank holiday the day before so they were catching up however at 9:10 I was called into the collection room. Well ahead of others waiting which I suppose pissed them off. Two staff nurses took care of me. It commenced with a high detailed blood test – once the blood was taken I was told it would take 2 hours to analyse so we went for breakfast, the time ticked away really slowly. If the test came back as negative then I would have to do a lot more Chemo. But the nurses called me 2 hours later and asked me to return to the collection room. Blood test were excellent, the value of stem cells present in the blood was at 20, anything above 15 was a go. As the Stem Cell Machine is very powerful the PICC line would not be strong enough so a IJV have to be inserted. This is done in a surgical unit much like a PICC line but in the Jugular (yes in the neck) the procedure was quiet okay and took a little under 20 minutes which seemed to surprise the nurses as they generally take closer to an hour. I walked back up and my neck did feel tender.

So they hooked me up on the machine

Basically I had 6 hours to get the collection completed or I would be kept overnight to continue the next day. Lines are connected to the IJV and the pump commenced. All blood is circulated through the machine and it extracts Stem Cells and plasma, Plasma is used to protect the Stem Cells when freezing. The photo below was taken 15 minutes into procedure, you are kept under observation for the moment you enter this room, The small bag between the monitor and my shoulder is the collection bag for stem cells (the red at the bottom are actually my stem cells 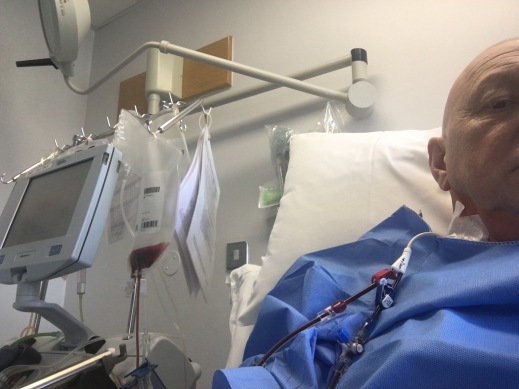 After less than 2 hours the machine advised that it had collected over 50% of the cells much to the surprise of the medical staff. By 3:30 pm they had 20% more plasma than needed, so they stopped collecting it. By 4pm they had what they needed in Stem Cells but continued for another 30 minutes.  So instead of a 6 hour procedure it was down do 4 1/2 hours
Next came a blood test to see if my blood was okay after the harvest. The lab also have to confirm that the stem cells were good. So they rushed it through. At 6pm we were told that my blood count was excellent and that the stem cells appeared good a full report on the stems would take days but I was free to go once the IJV catheter was removed. The staff nurse accompanied by a senior ward nurse done this procedure and it took 30 minutes. Once removed they had to keep me lying down and placed extreme pressure for 15 minute on the site where the IJV was this is the Jugular vein and therefor extremely dangerous. Then bandaged up with a pressurised bandaged and sat up for 15 minutes before been released to go home.

Got a call on the 8th of June to say that the Transplant date was set for the 4th of July pending further procedures this means that with on the 4th or 6 days before it I commenced BEAM chemotherapy- this is a life treating Chemo it is beyond aggressive. BEAM is set to kill any and all regeneration cells in the body, specially engineered to kill    Stem Cell, cancer cells and basically anything else it considers to be regenerating. Considered or discribed by doctors to be 10 days of living hell.

I have played down a lot during the course of these blogs. Reading between the lines the reader should realise that this was not a walk in the park and the next 3 weeks are life or death. There is little if any good information on the web about ICE and Stem Cell Transplant I have now realised why as the journey is a very difficult one, the victim faces death daily & the strong struggle to survive. This blog has taken me four days to consider to write about this or not and I am now strongly contemplating not writing any further, it is complexed and individual. People expect too much or happy endings but the reality of the procedures is more down to survival. Sometimes the truth is harder to take than what we expect